John Twallin, who died on December 14, was the driving force behind the creation and growth of the tools and hardware distributor Toolbank, and of its parent company, the Dormole group.

Twallin (or JT as he was affectionately known) was effectively born into the tool trade: he was a direct descendant of Ann Buck and her son John Roe Hickman, who together founded the tool distributor Buck & Hickman in London in the mid 19th century. 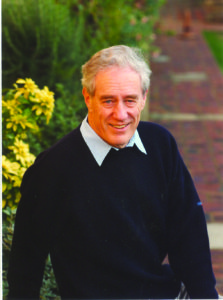 Following national service, which included qualification as a Russian interpreter, Twallin joined Buck & Hickman in the early 1950s and rose to become purchasing director,leaving when the firm was taken over in 1971. Together with Arthur Clemson, Buck & Hickman’s sales director, Twallin launched a midlands-based wholesale tool distributor, CA Clemson & Sons. Early in 1974, they bought out a Kent wholesaler, Curtis Holt using an off-the-shelf company, Dormole, to complete the purchase.

Over the following 45 years, Dormole grew to become the UK’s leading distributor of hand tools and power tools to the hardware trade, to builders merchants, and later to the fast-growing online market. Early expansion included opening branches in south Wales, Norwich, Bradford, and Southampton.

The Toolbank brand was registered in 1979, but at trade shows in the early 1980s the company was still exhibiting as Curtis Holt and Clemsons, sub-titled ‘The Tool Bank Group of Companies’. It was not until the 1984 edition of the catalogue was published – the first of many Big Blue Books – that the Toolbank name appeared as a national brand for the first time, and definitively as a single word.

Expansion continued through the 1980s: the launch of the Hand Tool Distributors operation, servicing DIY superstore customers; the acquisition of Rees Jones in Warrington and the opening of the north London branch in Bushey; the acquisition of a minority shareholding in the French wholesaler Denuziere; the start of a daily delivery service, initially from the Bushey branch; the launch of the XMS Christmas promotion; and the successful re-launch of the Faithfull brand.

The 1990s saw the creation of a national warehouse for slower-moving specialist lines, freeing up space in the branches and reducing the group’s overall stock level without impairing availability.

Following his illness, Twallin decided to take a step back from the day-to-day management of the group. A Toolbank management board was set up with Andrew Strong as CEO, and Twallin focused on his role as chairman of the Dormole parent board, although for many years afterwards he continued to play an active part in trading matters.

In 1995, the company unveiled Toolbank Express, the first significant step taken by a UK tool wholesaler towards a coherent online proposition, and which would evolve into Toolbank.com a few years later; and in 1997 it opened its first accounts with stockists in the Republic of Ireland. Profits were continually ploughed back into the business, funding new and bigger warehouses, continuously updated IT systems, and more marketing and promotional support for the customers. By 2002, group sales had reached £100m.

The global financial crisis in 2008 saw Dormole sales decline by 9%, and then by a further 9% the following year. For Strong, it showed the importance of shareholder support. “It was the ultimate test – in contrast to many companies in the industry, where there were people having to re-apply for their jobs and so on,” he said. “John and his family were all massively supportive – and over the long term, they have given huge support to the management team and its policies.”

Acquisitions continued: the hand tools maker Olympia, the fastenings specialist ForgeFix, and the aforementioned majority share in the distributor Biz Power Tools. These companies were consolidated within Dormole’s acquisition operation Galleon Investments. In 2018, with Brexit looming, the group strengthened its position in the EU with the takeover of the leading Irish tool distributor, Tucks O’Brien, and its sister company Tucks Fasteners & Fixings.

Twallin decided in 2014 to step down as chairman of the business he had co-founded 42 years earlier. He remained a non-executive director and continued to take a close interest in the group’s progress – but his presence at the Dartford office became less and less frequent.

“He was a real entrepreneur, a fearsome negotiator, and passionate about promoting the interests of wholesale distribution and Dormole in particular,” said Strong. “He drove us on at times when the odds seemed insurmountable because he believed so strongly in the business and the team that he had built. His love of the business and everyone in it, who he referred to as the Toolbank family, meant that the development of Toolbank and Galleon became one of the major focuses of his life. He and his family therefore kept re-investing in the business in order that it could grow and prosper.”

He is survived by his widow Elizabeth, his daughters Frances, Catherine, Philippa and Alex, and their families. His life and work will be recalled at a service of thanksgiving in Sevenoaks.

Group Managing Editor across the BMJ portfolio.
Previous It’s all gone a bit Stormzy
Next Dormole invests in Harrison & Clough