Builders merchanting is better than most other sectors in paying men and women equally, research has found.

By law, all companies, charities and public sector departments of 250 employees or more must publish their gender pay gap figures.

Figures obtained by the BBC showed overall, the median pay gap in favour of men lowered slightly from 9.7% last year to 9.6% this year. The median pay gap is calculated by comparing the difference in pay between the middle-ranking woman and middle-ranking man in the same companies. The figures relate to the 2017/2018  financial year as featured on the gov.uk website, as the figures for the 2018/2019 are not yet available. 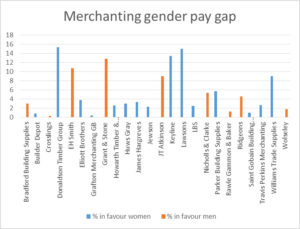