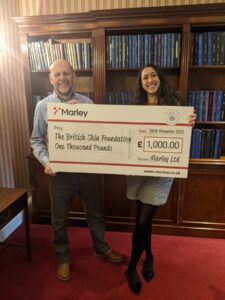 Marley has raised £1,000 for The British Skin Foundation charity as a result of their ‘Safe in the Sun’ campaign. The initiative sought to highlight the negative effects of damaging sunrays such as premature skin ageing, heat exhaustion and deadly malignant melanoma, particularly for those in the construction industry working outdoors.

Marley has been championing safety in the sun for well over fifteen years. This year, the company’s ‘Safe in the Sun’ campaign saw it focus on three important lines of defence in the fight against sun-induced illness: covering up, sunscreen use and hydration. Marley created a ‘Safe in the Sun’ kit, designed especially for outdoor construction workers such as roofers, including a Marley-branded T shirt, sunscreen and water bottle. The kit was made available via the company’s website. Each time a kit was sent out, Marley pledged £1 for The British Skin Foundation, however the total raised for the charity will be boosted by the company to the tune of £1,000.

Marley’s marketing manager, Daniel Redfern, said: “With the British Journal of Cancer revealing that construction workers represent a high proportion of deaths from melanoma skin cancer, this is clearly a serious issue. The British Skin Foundation is the only UK charity that raises money to fund research into all types of skin diseases, including skin cancer. Collaboration between Marley and the charity is therefore plainly a good fit, and I’m over the moon that we can make this contribution to its work. The money will be used for potentially life-saving research and raising awareness. Here at Marley, we look forward to working with the charity on an ongoing basis to boost the sun safety message further.”

Alongside availability of the ‘Safe in the Sun’ kit on its website, Marley included no-nonsense advice to make sure its customers were aware of the potential risks, and were properly protected throughout the summer. An all-encompassing approach made sure that all bases were covered and that every aspect of sun safety was included. Although especially important in the summer, the company makes it clear that this is a year-round concern.