The eight team members set off from Ouistreham on the Channel coast on 2nd October and arrived in Vaison-la-Romaine, at the foot of the challenging Mont Ventoux Tour de France route, on 4th October. The following day they completed the 18-mile climb to the mountain’s 1,900m summit. 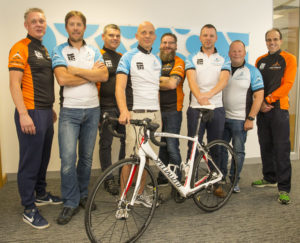 75% of all funds raised will be donated to the British Heart Foundation, with the remaining 25% going to Cancer Research UK. Both charities were chosen in recognition of several Forterra staff who have been affected by these conditions. Prior to setting off, the teams had already raised over £10,000.

Harrison said: “Mont Ventoux certainly sets the benchmark for feats of endurance – our physical and mental stamina has been well and truly put to the test, but reaching the summit made the challenge well worth it.

“Conquering this infamously demanding route whilst raising funds for two fantastic charities that have a personal connection to so many of our staff is an achievement for all involved, not to mention a privilege.”

Founded in 1996, Challenge Adventure Charities organises two major cycling events each year in aid of charities chosen by the Trustees and event participants. Excluding this month’s event, the challenges have raised £4.2m to date. challengeadventurecharities.org.uk.