The UK construction resurgence continued in April with workloads boosted by the fastest rise in overall new orders since September 2014. That’s according to the latest IHS Markit/CIPS UK Construction PMI® Total Activity Index which showed a headline figure of 61.6 in April, down only fractionally from March’s six-and-a-half year peak of 61.7. 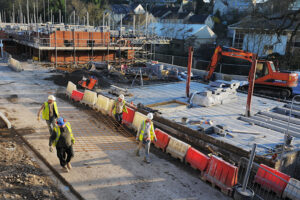 However, demand and supply imbalances pushed input cost inflation up for the seventh month in a row to its highest since the survey began in April 1997. Commercial work (index at 62.2) was the best-performing broad category of construction output in April, although the rate of expansion eased slightly since March. Civil engineering (index at 61.5) bucked the softer overall growth trend in April and signalled its fastest speed of recovery since September 2014.

Total new work increased for the eleventh consecutive month in April. The rapid rise in demand for construction products and materials continued to stretch supply chains in April, with the latest lengthening of suppliers’ delivery times the third-greatest since the survey began in 1997, exceeded only by those seen during the lockdown in April and May last year. Steel, timber and transportation were among the most commonly reported items up in price.

Looking ahead, construction companies remained highly upbeat about their growth prospects in April. More than half of the survey panel (57%) expect a rise in business activity during the next 12 months, while only 7% forecast a decline.

Duncan Brock, Group Director at the Chartered Institute of Procurement & Supply said: “The building blocks were in place in April as builders confirmed more work, more job opportunities and strong optimism for the next 12 months. “The overall growth rate of new business strengthened to the fastest since September 2014 as all three sectors improved and civil engineering the laggard of last year gained the most momentum. “Issues around supply chain performance acted as a drag on capacity however as supply constraints on essential materials increased to one of the third highest levels since 1997 when the survey began. Brexit issues remained a factor affecting deliveries from the EU and suppliers generally were struggling to meet the sudden rush in demand leading to shortages of basic materials. “This inevitably led to the sharpest rise in cost inflation in a generation as builders scrambled to catch up on projects but the biggest rise in job creation since December 2015 also followed, signalling sustainable growth in the sector this summer.”