If we’re kind and polite, the world will be right. Thank you.

Well, that was all rather splendid and took our minds off, if only for a few days – all the horrific things that are happening in Ukraine, the turmoil at Gatwick et al, and the nonsense in Westminster.

There are some things that the British just do better than anyone else and boy, did we do them well this weekend. We do pageantry like no other nation can do pageantry. We’re also a dab hand at queuing, so the Gatwick chaos that would probably have the peasants rioting in France just has hoards of Easy-Jet hopefuls tutting and moaning on Twitter.

Vladamir Putin may have his massed armies, depleted though the numbers were for this year’s May 9 Victory Day. He may think that the way to celebrate his country’s past glories is with war-heads and guns and rifles, but the Great British Public know better. After the 75th anniversary of VE Day turned into a bit of a damp squib thanks to Covid, the British Street Parties were back with a vengeance. And bunting. So. Much. Bunting.

I’ll see your nuclear war-head, Mr Putin, and raise you a table of cupcakes. Decorated by five-year-olds with the Union Flag and a tonne of sugary sprinkles. And jubilee-themed cocktails. And feeling a bit naughty for sampling them at 11am. And trestle tables the length of the road, groaning under their load of Victoria Sponges, cocktail sausages and bowls of Coronation Chicken. And bunting. So. Much. Bunting. Not for us the tanks rolling through the main squares, we want sports stars on buses, dancing along to the music of the last 7 decades, the streets awash with union flag-clad revellers who’ve camped out overnight to make sure they get a spot at the front. And bunting. So. Much. Bunting.

We don’t want tub-thumping speeches from a leader who is still so scared of Covid he sits at the end of the world’s longest dining room table. We want Sir David Attenborough, projected against a backdrop of a 17th century palace, we want a four-year old watching a very long parade, hyped up on sweets to keep him occupied, and doing his very best to behave, but still being a four-year old. We want Diana Ross, dressed to kill, we want our Eurovision-nearly Sam Ryder, prancing about on a stage in front of the gates dressed in spangles and sequins like the bundle of optimism and joy that he is.  We want drones that fly above our national monuments and make pretty pictures, not of guns or battles, but pouring tea-pots, handbags, a flying goose and a corgi. They put a corgi, in lights, in the sky over Buckingham Palace. That, ladies and gentlemen is what happens when someone reaches deep into our national psyche and displays it, writ large in the night sky.

And we want to kick the whole thing off with a filmed sketch featuring two national treasures. Putin has his tanks, his guns, his greatcoats and ridiculous fur hats. We have Paddington with his duffel coat and his floppy hat, discussing his marmalade sandwiches with Her Majesty. And that makes us better than Putin.

In future, everyone should start the day with a look at this picture. It will make everything better. 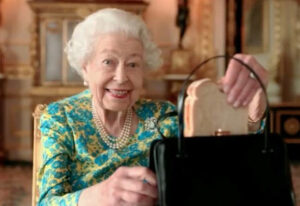 Incidentally, as there was so much reminiscing about the last 70 years, allow me to share one of my family snaps – if you know, you know