Triton Showers is now officially carbon neutral, taking the business one step closer to being carbon net zero. The milestone follows a significant reduction in its Scope 1 & 2 carbon footprint since 2017 and investment into multiple offsetting projects. 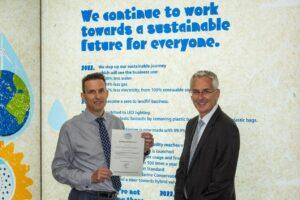 Working with the Carbon Trust, a global climate change and sustainability consultancy, Triton achieved Carbon Neutral certification as part of a detailed audit into its 2021 operations. Further to that, an extensive carbon reduction plan was developed that has already reduced CO2e emissions and will continue doing so into the future. The certification covers Triton’s Scope 1 and 2 emissions for its UK and China operations, as well as Scope 3 emissions for business travel, for the period 01 January 2021 to 31 December 2021 in accordance with PAS 2060:2014 – Specification for the demonstration of carbon neutrality.

As part of its strategy, Triton has participated in tree planting and renewable energy programmes. This activity has been furthered by supporting the Musi River and the Sipansihaporas projects, both of which are hydropower initiatives in Sumatra, Indonesia, where Triton has purchased 420 tonnes worth of CO2e offsets to cover its 2021 footprint.

David Tutton, managing director at Triton Showers, said: “We know the climate change crisis is on our doorstep. Being Britain’s number one shower manufacturer, we recognise the importance and responsibility we have in tackling this challenge.

“That’s why we are incredibly proud to have achieved carbon neutrality and taken this latest step on our sustainability journey. We’re not stopping there though, as we want to go even further now and be the most sustainable shower brand in the UK.

In addition to its latest achievement, Triton has also been a zero-to-landfill business since 2015, and radically reduced packaging, and revised the materials it uses to pack showers. This includes removing 1.7m plastic bags from the supply chain; protecting all electric showers with cover bags made from 100% recycled plastic material; and working with suppliers to remove single use plastic from the supply chain, so that millions of parts are now delivered to Triton in tote boxes that are returned and re-used time and time again.

The brand is also on a mission to educate the nation about using efficient electric showers, which will help to lower energy and water consumption and save consumers money, in the form of its latest TV campaign ‘Every Drop Makes a Difference’, which aired throughout May and June 2022.

Tutton added: “Minimal environmental impact is at the heart of our vision for the next five years, and we’ve already made big steps.”

“In August 2021, we achieved the Carbon Trust Standard for Carbon by demonstrating how we had lowered our footprint by 38 per cent, and now we’re celebrating our carbon neutral status less than a year since that accolade. This is just the tip of the iceberg for us, and our next aim is to be carbon net zero by 2025.”