Whoever fights monsters should see to it that in the process he does not become a monster. And if you gaze long enough into an abyss, the abyss will gaze back into you.

‘Scuse my French, but what a bloody mess. How is it that we went through so much pain and anguish, lost so much money, so many jobs, went through so much sacrifice and hardship last Spring, only for us to be back in national lockdown for heaven only know how long again this time?

I know the virus is not the government’s fault – whatever the nut-job conspiracy theorists ,might say – and I know that, by and large, it is doing what it can to get us all through this. I know that shepherding us all through this is a thankless, probably impossible, task. I know that no-one in government or the opposition actively wanted a lockdown, to cancel Christmas, rain on our New Year Parades or fizzle out our fireworks.  I get that it is in the educational best interests of no child to be off school, home-learning without structure and without their peers and friends in these circumstances.

So, all that being said, why does this Government persist in making it seem as though they are making it all up as they go along?

Three weeks ago, Education Secretary Gavin Williamson, the former fireplace salesman for whom the phrase ‘chocolate fireguard’ might have been invented, threatened to sue schools in Greenwich should they close early for the Christmas break in order to help in the fight against rising coronavirus infections in London and the South East. He threatened them with court action. Who the hell does that help? Not the government, not the schools, and certainly not the pupils or teachers. Maybe it would have been handy for a few of the legal profession who might have got a few quid out of it. Those pupils would only have had the same length of Christmas holiday as pupils in private schools were getting anyway. But no, they all had to open.

Not only that, but all schools were then told, with but a few weeks’ notice, that they would have to implement testing regimes for all their pupils. Not times-tables or who won the Battle of Crecy tests, but the one where you poke a stick down your throat until you nearly throw it back up again and then plunge that same stick up your nose as far as it will go. That sort of test.

At both my teenagers’ schools, the senior leadership teams had been working all through Christmas trying to make sense of guidance that was changing every day, attempting to work out how they could administer Covid tests to 1800 teenagers whilst maintaining social distancing, discipline and maybe, just maybe, providing some sort of, you know, teaching and education.

Still, builders, plumbers, decorators, builders’ merchants and their suppliers remain essential services and are open for business, PE with Joe Wicks is back on YouTube and the big orange baby in the White House will be gone in less than 3 weeks. Halle-blooming-lujah, let’s at least be thankful for that.

Incidentally, that Battle of Crecy? We won. It was against the French. 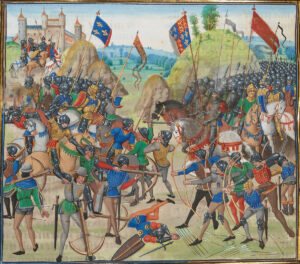