Builders merchant group MKM supported the the Cash for Kids ‘Mission Christmas’ campaign for the 13th consecutive year in the run-up to Christmas 2022. The initiative ensures that disadvantaged children and young people nationwide will have something to open on Christmas Day. 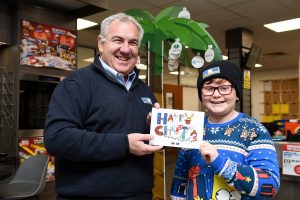 This year, MKM’s Central Support in Hull organised five bulk bags of donated toys and Christmas goodies which were collected by the Cash for Kids bus on ahead of the big day.

Rachel Constable, Head of ESG at MKM, said: “It’s fantastic to be involved in our 13th Mission Christmas campaign with Cash for Kids. It is such a brilliant initiative that embodies what the ‘season of goodwill’ is all about. It’s been great to see so many people get involved, and we’re hoping it spreads a little Christmas magic on the 25th.”

The festive feels don’t end there for MKM, though. The merchant has also unveiled the winner of its annual Christmas Card competition, which invites young people from around the UK to submit a design which will be printed and used by its 106 branches.

This year’s competition was won by 11-year old Samuel from Northamptonshire, whose eye-catching design featured an array of tools and building products spelling out a Christmas message. A printed version of Samuel’s design was presented to him along with £100 in gift vouchers at his nearest MKM branch, in Milton Keynes, by branch director Gordon Walker.

The construction industry is expected to see a recession this year after two strong years, …