Earlier this year, the company moved its finished goods stock from its manufacturing site in Cumbria to a new 60,000 sq ft warehouse facility in Sandbach, Cheshire, a move that gives easier access to the motorway network. 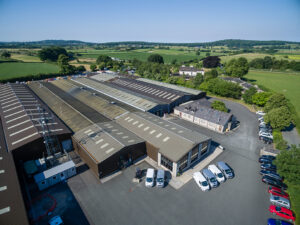 The move also released around 25,000 sq ft of space in the Elmsfield Park, Cumbria facility enabling the expansion of Kudos’ manufacturing capability. In addition to increasing its enclosure output, the extra capacity will see the installation of a new shower tray production facility to supplement the existing tray manufacturing unit in Coleraine, Northern Ireland, which has seen growth by over 50% in the last three years and is rapidly approaching full capacity.

Group Chairman & CEO of Kudos International, Bruce Ledwith says: “Kudos has been commited to UK manufacturing since our conception over 20 years ago and whilst the past few months have been a challenge for all businesses, we’ve been delighted with the positive feedback and commitment to Kudos from our displaying showrooms. I have personally visited many over the past few months and found them not only busy but very complimentary of Kudos, especially of our Retail Support Managers. The service offered by our RSM team, which doesn’t just stop at fitting and maintaining displays, is to help our dealers promote and sell our high quality British-made products confident in the knowledge that they have the locallly based technical support on hand. I am delighted to report that the full RSM team have now returned to normal duties, albeit under adherence to current guidelines on workplace safety. The level of activity in our market sector and our customers’ positivity towards Kudos was a major contributing factor in our decision to press ahead with our investment to expand our UK manufacturing capability at this time”.

Group Managing Editor across the BMJ portfolio.
Previous Construction output slips back in August
Next Lakes and Fayers collaborate on virtual showroom