Keyline asks customers what the future holds for construction?

With the government starting to communicate its plan to ease restrictions, Keyline Civils Specialist recently conducted a survey to investigate how the ongoing crisis is continuing to affect construction businesses, both big and small.  The results suggested that while concerns are varied, a key issue is that many are unsure of what the future holds for the sector. 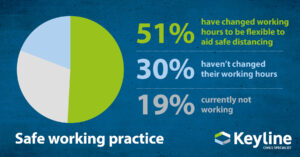 The research was carried out between the 28th April and the 2nd May 2020 questioning business owners and contractors working in the housing, commercial, infrastructure, industrial, retail and public sectors how they have been adapting to allow work to continue despite the challenges. These were the key findings:

Working safely is at the top of the agenda across the supply chain, with manufacturers re-configuring their operations, merchants working to new guidelines and construction workers continuing to maintain the two-metre distance, even on site. As the government plans its back to work strategy, it is encouraging to see that more than 50% of those surveyed have changed working hours to aid social distancing.

Together, these figures indicate that while a number of UK contractors (excluding Scotland) have returned to work this week, activity is still reduced and delayed in some areas. However, with the return of a number of larger housebuilders and manufacturers to site or production, along with the recommissioning of HS2, this would suggest that on a wider scale there is movement on construction sites as well as demand on the supply chain.

Generally, those with concerns fell into four categories:

Some respondents even highlighted that while they wanted to work, they were unable to source PPE equipment as their normal suppliers had to prioritise providing for the NHS.

On speaking to a number of customers through this most recent survey, it was clear to Keyline that there were mixed reactions about how to work through the crisis. One contractor commented:

“Our working hours stay the same, but with fewer staff to carry out a job, works take longer.”

Another said: “We have changed our week to 4 days and stagger start times.” A third was concerned about “an upsurge in positive COVID-19, due to the irresponsible non-compliance of others.”

While many confirmed they are working within the HSE and government guidelines, one telling comment received highlighted the difficulties met when trying to adapt working hours: “We informed our Local Council of this intention and were informed they would not allow a change to site working hours, so we are unable to do that.”

Finally, Keyline asked an open-ended question on how respondents were experiencing business through this current crisis. While many talked about uncertainty going forward and others were concerned about the future of the economy, the largest sentiment felt was personal stress and worry. Thankfully, one of the latest changes to the current situation is that those in the construction sector are now able to receive COVID-19 testing, which will hopefully relieve a level of concern for many.

This week is set to be an important one, with the government due to lay out its plans for the future, including task specific guidelines to be announced for each sector.  With reports of wider walkways being imposed on sites and claims that the virus is harder to catch outdoors, it is hoped that with additional and evolving government guidance, more construction companies will find their concerns alleviated and their business able to continue in far more positive and certain circumstances.