Kent Blaxill manager to run 180k in aid of Help for Heroes. 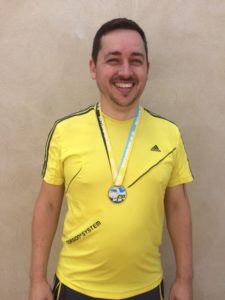 Paul Jones, manager of the Melton branch is running the marathon task in aid of armed forces charity Help for Heroes. New not only to marathons but also to running itself, Jones  started off with the Colchester Half Marathon in March and the Colchester Stampede 10k in May and completed the Alton Water 10k and Nayland 5k in June.

He says: “I wanted to raise money for Help for Heroes, challenge myself and mark the 180th anniversary of Kent Blaxill. I joined the company last year and I’m proud to be part of such a long-established business. I asked our management team if they would sponsor me and they were keen to help.

“ I moved up a gear to complete my first full marathon, the Orwell Challenge, on a very hot Father’s Day and a serious trials event (running cross-country, through mud, seaweed, fields and hedges.)  I’ve now completed 83.2 km’s (51.7 miles) and my next event is the Alien vs Trail Runners half marathon at 8pm August 11th through Rendlesham Forest in Suffolk. I’ll follow that with the Great East Run in Ipswich September 16th so it feels like I’m just starting to break the back of the 180 km challenge now.”

Simon Blaxill, Managing Director at Kent Blaxill said: “We are proud of Paul Jones for taking up such a challenge on behalf of Kent Blaxill.  180 km across our 180th year will be a considerable achievement and of course, we’re delighted to sponsor him.  Help for Heroes is a charity close to our hearts as Colchester is a barracks town and our company began in Colchester High Street in 1838.   We always want to support our local community and Help for Heroes is our annual charity for 2018.  We are equally thrilled to be marking Kent Blaxill’s 180th anniversary in 2018 and wish Paul every success – he is certainly making myself and all his Kent Blaxill colleagues very proud.”

To support Paul Jones and his 180 km’s for Kent Blaxill’s 180th Anniversary, his Justgiving account can be found at www.justgiving.com/fundraising/KBrunning180