Jobs for the girls

I hate to hear you talk about all women as if they were fine ladies instead of rational creatures. None of us want to be in calm waters all our lives

I got irritated by something I heard on the news last night. Not unusual, I’ll grant. However, this time it wasn’t by anything that the PM or a member of the Cabinet had said, which is rather rarer.

This was a report highlighting the effect that the pandemic has had on women, specifically women in the workplace. One particular line got to me: “Nicole, a landscape architect, is a rare female face in construction”.

I suppose it depends what you mean by rare and in which area of construction you are looking. In this industry certainly, women are not a rarity. We’re not the majority, certainly, and there aren’t equal numbers of us, but rarities we are not. Just look at the number of women who are running their family businesses and the number of senior leadership teams that feature huge numbers of women. And not just in the ‘girly’ sectors either. I can think of plenty of women who are out there selling drainage and civil engineering and bricks and all sorts of tough products that stereotypically might be seen as boys’ toys.

It’s another example of how the mainstream media lumps the whole industry together as ‘construction’ without recognising that there is a massive range of sectors that go to make it up. And within that, a massive, wide, diverse range of jobs and careers and an equally diverse range of people doing those jobs.

Apparently tomorrow, Thursday 9th, is International Day of Women and Girls in Science, according to a press release I received this morning from one of those random data companies. It says that, globally,  just 1.4% of CEOs in the construction industry worldwide are female. It also says “it might not come as a surprise that heavy construction companies (such as road construction and civil engineering) scores lowest with 1% female CEO’s. The number of female decision makers at General contractors and installation companies ranks slightly higher with 1.4%.”

Once again, that’s not necessarily the situation in this industry. So, it’s good to know that we are ahead of the curve on some things.

Construction has a massive range of jobs and careers that can be done by people. That’s people of any genders, any age and any educational level, as long as they have the right attitude. Apprenticeship schemes are a great way in, as they provide opportunities to get paid whilst still learning and are currently likely to prove much more appealing to a great many school leavers than university, which hasn’t had the greatest press under Covid.

As we are in National Apprenticeship Week, I thought I’d share this video that Travis Perkins posted showing one of its apprentices Megan Simpson interviewing new Keyline managing director Dean Pinner.

Oh, and if you still think building is only for boys, here’s what appeared in my garden on Tuesday. An igloo, built with hand-thrown snow bricks, made with a Tupperware mould. By a 13-year-old girl. 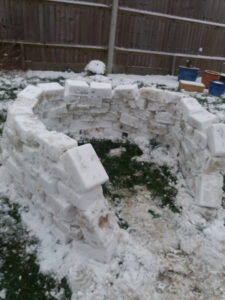 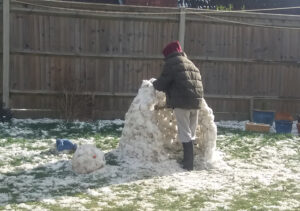