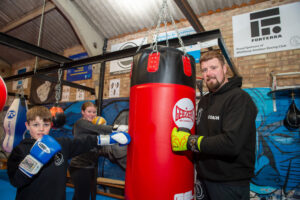 Forterra has donated £500 to Whittlesey Amateur Boxing Club, near Peterborough to aid with their fundraising following enforced closures due to COVID-19 restrictions.

After spending their existing funding on preparing the gym following the easing of restrictions, the club will now benefit from a £500 donation from Forterra, which has been spent on a brand-new punch bag.

Mark Hurst, a Strapper at Forterra’s Kings Dyke factory in Whittlesey, said: “I’ve been involved with the club since 2014, and we’ve been through a lot. We’ve had a lot of different premises and we even had to close for a short time. Myself and the other coaches have worked really hard to bring the club back to life.”

“Because we are such a small community, we are always fundraising. We’ve applied for grants and schemes but we’ve unfortunately never been successful. We’re always taking part in events to raise money for the club.”

“We wanted to make sure the kids were excited to come back to classes, especially after having such a difficult time during lockdowns.

“Now that we’ve spent the money, we’re back to fundraising. The donation from Forterra has allowed us to buy a brand-new heavy boxing bag, which is something we’ve always needed. I want to say a huge thank you to Forterra for their donation and to the team of coaches at the club who work so hard to keep us going.”

Stephen Harrison, Chief Executive of Forterra, added: “The work of local community groups like Whittlesey Amateur Boxing Club is so important, especially after the difficult period we have all had. We are pleased to be able to make this contribution towards the club and commend them for all their hard work.”