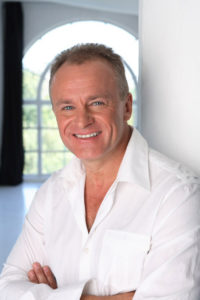 Davro hosted popular Saturday night shows on both ITV and BBC in the 1980s and 1990s, including Bobby Davro on the Box, Public Enemy Number One and Winner Takes All. In the 2000s he appeared in BBC TV’s Eastenders and has appeared in numerous stage plays, musicals and in pantomime as well as taking part in reality TV shows including Dancing on Ice and Celebrity Big Brother.

In addition to celebrating the achievements of young people in the building material supply industry, and the companies that support their development, the Awards Dinner is one of the BMF’s major charity fundraising events each year.  Davro will host a live charity auction raising money to be shared equally between the BMF’s charity of the year, Variety – the Children’s Charity, and Samaritans.

He will also present the prizes for the BMF annual Golf Tournament and to the winners of this year’s other social event, a Five-a-Side Football match.

The BMF Members Annual Conference and Awards Dinner takes place on 19  September at St George’s Park, Burton on Trent, the home of England’s national football teams.  The BMF’s annual Golf Tournament will be held on the previous day, 18 September at the newly-opened JCB Golf and Country Club.