Kate Tinsley, managing director of Ibstock’s Clay Division, has won  a top prize at the ‘Women in Business Awards 2019’  for her outstanding achievements in the construction sector. 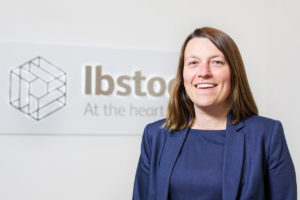 The fifth annual LeicestershireLive Women in Business Awards, took place at the Leicester City FC King Power Stadium earlier this month, to celebrate the achievements of the most successful female entrepreneurs and professionals across the region.
Tinseley picked up the ‘Women in Construction’ Award at the ceremony for her ongoing contribution to the UK’s construction market, being one of only a handful of women that has reached the top of a largely male dominated construction industry.  Prior to being managing director at Ibstock, she was CEO at buildersa merchant Buildbase for the Grafton Group. Tinseley was also commended for the role she is playing in helping attract more women to think seriously about the exciting career opportunities available in construction, which includes her ambassador role for the #YesSheCan campaign, an initiative aimed at tackling gender inequality in the workplace that encourages women in business to take the next step and have more underlying self-belief.
Tinsley said: “It’s very humbling to be recognised with such a prestigious award so I am absolutely delighted to have won.  It makes me extremely proud that I am having a positive impact and helping to inspire more and more women to reach their goals, whether this is in construction or other industry sectors.”
In her role at Ibstock, Tinsley is responsible for the performance and strategic direction of both the Ibstock Brick and Ibstock Kevington brands, ensuring the company maintains and enhances its number one market position.  With 1,500 employees across 21 manufacturing sites nationwide and 18 special shapes and component factories, the company produces over 450 different brick types, playing a fundamental part in the development of the UK’s built environment.
Share