Since the first lockdown last April, the Worshipful Company of Builders’ Merchants has welcomed 11 new Liverymen and Freemen.

All admissions and installations over the last 12 months took place via Zoom and now the Livery now has a very healthy 206 active Liverymen and 28 Freemen. Membership is by invitation only. 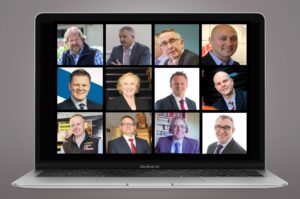 At the Company’s most recent Zoom event this April, David Carver of Carver (Wolverhampton) Ltd became a Liveryman.

The Master Stewart Pierce says: “It’s been an unusual but busy year for our Livery and I’m pleased to say the Company is in good health and growing. It’s fantastic to be part of a Livery that represents so many active members from the industry, and at my Installation last October, I highlighted the importance of staying connected. While all of our usual City events have been cancelled, we arranged a number of virtual experiences from a tour of Hidden London and a tour of my home town Eastbourne, through to Gin and Whiskey tastings. We encourage all our members to attend our networking events, support the Company’s fundraising activities, and take up the opportunities associated with being part of a Modern Livery Company.

“We hope live events can resume from late summer and with a successful vaccination programme in full action, there is some confidence that elements of normal life can once again be enjoyed later this year. It would certainly be lovely to see members for ‘real’ at least once before the end of my Master’s year, so I will keep my fingers firmly crossed!”

WCoBM represents all parts of the industry and members include leading figures in merchants, manufacturers, wholesalers, distributors, buying groups, service suppliers and ancillary trades. The Livery Company plays an important role in the builders’ merchant sector, supporting training & education and fundraising for a number of charities. It is also very active in supporting the Mayoralty and raising the profile of builders’ merchants in the City.