Elliotts, the South’s leading independent supplier of building materials for the trade and public, has been presented with 175th anniversary commemorative trophy by leading power tool company, Stanley Black & Decker.

The trophy was received by Elliotts Chairman, Stuart Mason-Elliott, who said “It’s an honour to be presented with this commemorative trophy to recognise our 175th anniversary.

“It’s important to Elliotts that we continue to build relationships and work with the best suppliers, so we’re very proud to work with a company like Stanley Black & Decker.”

Stanley, who joined forces with Black & Decker in 2010, will also be celebrating their 175th anniversary this year.

Mick Gill, General Sales Manager of DeWALT (owned by Stanley Black & Decker), said, “Elliotts has been a big supporter of Stanley Black & Decker and we’ve had a major partnership for decades. As a company, we wanted to show our appreciation for their continued business and contribution to the construction industry.

To find out more, visit www.elliotts.uk

I'm the Assistant Editor on BMJ. If you have any product or people information, or some news you'd like to share, please feel free to email me.
Previous Combilift open new HQ in Ireland
Next BSRIA supporting Smart Building 2018 Conference 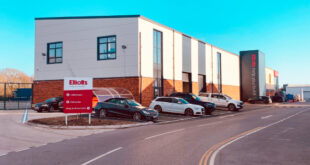 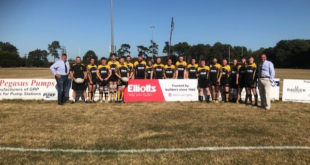 Tadley RFC get support from Elliotts 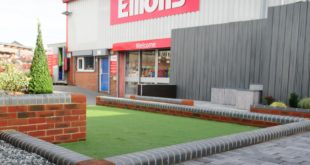