Shower designer and manufacturer, Roman,  welcomed the MP of Sedgefield, Paul Howell, to its headquarters in Newton Aycliffe, County Durham. 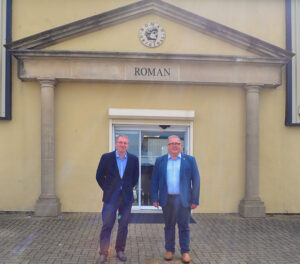 Howell has been supportive and interested in Roman since he was elected as the MP for Sedgefield in December 2019. Following 18 months of restrictions, the manufacturer was finally able to give him a tour of its manufacturing facilities, infrastructure and showrooms – whilst also highlighting successes in International trade and specification.

Roman is one of the largest employers in the constituency and were keen to highlight inequalities in International trade tariffs and the evolving UKCA product marking system – Howell has been a great ally in supporting these issues.

David Osborne, CEO of Roman, said: “It was great to finally welcome Paul to Roman and to show him our manufacturing facilities and showrooms in person.”

Howell said: “It was fabulous to meet David and the team today and see the showrooms, infrastructure and manufacturing facilities at the Aycliffe Business Park HQ. This is a shining example of ‘Made in Britain’ at its finest and I look forward to visiting the team again soon.”