Project-starts back on downward spiral as materials inflation continues

Glenigan has released the July 2022 edition of its Construction Review. This Review focuses on the three months to the end of June 2022 (Q.2), covering all major (>£100m) and underlying (<£100m) projects, with all underlying figures seasonally adjusted.

The central finding of the July Review is that project-starts returned to decline as construction materials inflation continues to accelerate.

On a slightly more positive note, both underlying main contract awards and detailed planning approvals strengthened during the second quarter of 2022, but ultimately remained lower than a year ago. 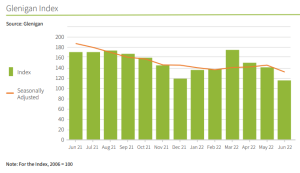 The July review highlights the industry’s disappointing return to decline, as work commencing on-site declined 38% against the preceding quarter to stand 45% lower than the same time in 2021.

July saw the value of major project-starts (over £100 million in value) falter, plummeting 65% against the preceding quarter with a substantial drop of 77% compared with a year ago.

This decline can be largely attributed to ongoing supply chain issues, prompted by the Russia-Ukraine war. The ongoing conflict, which shows little sign of easing in the short term, has accelerated materials inflation, creating an industry stumbling block which it will take time to surmount.

Underlying performance across sector verticals was a Curate’s Egg. There were some bright spots for residential construction, with the overall value rising 17% in Q.2 compared to Q.1, despite falling back 21% against the previous year.

Work starting on-site for private housing rose significantly on the previous quarter experiencing an overall increase of 43%, buoyed by a rush of work initiated by developers ahead of new building regulations. However, these figures remained 14% lower than 2021 levels.

Social housing project-starts performed particularly poorly, slipping back 42% against the preceding quarter as well as 2021.

Performance in the non-residential sector was predominantly negative, holding back any form of recovery.

Civil engineering performed particularly poorly, down 47% against the previous year, with the value of project-starts experiencing a significant decline against the preceding quarter, falling back 27%.

Drilling deeper, the utilities sub-vertical suffered the weakest period of any sector, with project-starts dropping 30% during Q2, standing at almost half (-48%) the value of the previous year; this represented the strongest decline registered against 2021.

Industrial project-starts fell by a quarter against the previous year, registering the greatest quarterly decline (-36%) of any non-residential sector. Health construction starts remained unchanged on Q.1, but also fell by a 25% compared with a year ago.

Drilling into the figures, retail was the only non-residential sector to achieve growth against the preceding quarter, with a modest 6% rise despite project-starts coming in at nearly a third lower than a year ago (-28%).

Hotel & Leisure and Education experienced strong declines during Q2 to stand 40% and 37% lower than a year ago, respectively. Further, both registered a value decrease of 32% and 21% compared with the preceding quarter.

Office starts declined 23% against the preceding quarter, as well as 30% compared with the same period last year.

Northern Ireland also posted strong results, experiencing a growth of 3% against the preceding quarter and a significant 44% growth compared with 2021.

“Project-starts have unfortunately returned to decline as the industry continues to suffer from the fallout of the Russia-Ukraine war, especially the effects of rapidly accelerating construction materials inflation.

“Clearly, the sector is some ways off the levels of recovery seen this time in 2021, but I am cautiously optimistic that signs of strengthening underlying main contract awards and detailed planning approvals point to a development pipeline which is sure to boost levels going into the second half of 2022.” 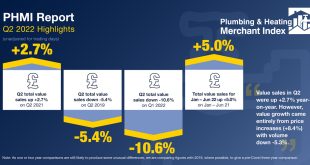