Merchants and suppliers learned of the importance of focusing on their employees – and their own – mental health at the  opening session of the BMF All-Industry Conference 2019 last weekend (June 13 – 16). 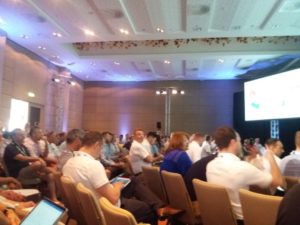 The conference, held in the Croatioan city of Dubrovnik,  opened with conference moderator Gethin Jones interviewing BMF Chairman Peter Hindle MBE and BMF CEO John Newcomb. Hindle reported that the BMF’s work on greater segmentation of the membership would soon be complete, which will allow them to target their services more specifically at the different types of member. Newcomb reported that he is proud of the fact that the membership has risen by 360 companies, up 111% since 2012.

Knowles’s presentation included thanks to the industry for the help and support shown to the TV programme DIY SOS The Big Build, which he fronts as well as a focus on the benefits to one’s own mental health of coming together to help others.

Laybourn and Benjamin told the story between them of how they met when the latter was driven to the point of suicide by his schizo-affective disorder. He was close to jumping off the edge of Waterloo Bridge in London when a complete stranger, Laybourn, stopped and talked to him, stopping him from jumping. Years later, Benjamin tracked Laybourn down via a social media campaign in with Mental Health UK and the pair now work together, campaigning for mental health awareness all-round the country. Benjamin said: “Suicide is the biggest killer of men under 45; it’s never been more important to talk openly about how we feel and seek help when we need it.”

Counter terrorism expert, Walton spoke about the terrorism threat in the past, now and where it is going in the future, highlighting some of the terrorist attacks around the world over recent years, looking at mistakes that were made and what lessons were learned. He said that one of the unintended consequences of the rise of social media is the way that terrorist organisations can have a far wider reach across the globe. He also warned of the dangers of cyber-attacks and the need for businesses to have adequate cyber defence systems in place

Edwin Morgan, Interim Director General for External Affairs at the Institute of Directors, talked about how businesses are being affected by Brexit uncertainty, the UK unemployment rate and the difficulty of recruiting staff. “Not only is it harder to find workers from abroad, but wages will also go up as a result of that,” he said.

Sports Psychologist Michael Caulfield, who finished the morning’s sessions, has worked with football clubs, football managers Gareth Southgate and Frank Lampard, former champion jockey Sir AP McCoy, athlete Sir Mo Farah among many others. He said that sport has an ability to get people talking. “I have never been more proud of sport than I am now,” he said.

Group Managing Editor across the BMJ portfolio.
Previous The IPG peddle ahead
Next NMBS heads to Sorrento in 2020