Flame Heating Group founder John Savage has written to the leaders of the three main political parties urging them to scrap the 5% VAT rate on domestic energy as soon as the country departs the European Union.

Such a progressive tax cut would also cut the energy bills of low and middle-income earners more in relative terms, stimulating the economy and greatly reducing the current 2.5m households in England currently classed as living in 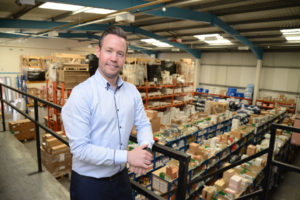 Savage, whose business is based in Boldon, South Tyneside, has written letters to Conservative Prime Minister Boris Johnson, Labour Party leader Jeremy Corbyn and Liberal Democrat leader Jo Swinson, seeking their support to scrap the VAT charge once the United Kingdom leaves the EU. In the letter, he says, “I believe government must seize the opportunity to abolish this charge once this country is free to administer its own tax affairs.”

VAT was imposed on household energy in 1993, but under EU rules it cannot be removed, and the UK is obligated to continue to collect the minimum rate of 5%.

He said “Once the UK is no longer bound by these EU rules, our government has an opportunity to benefit most people while at the same time helping safeguard the environmental future of this country.

“Cutting the VAT rate to zero will reduce the cost of a whole range of energy saving products and technologies, which in turn will encourage their widespread adoption.

“There is an increasing acceptance that we must take urgent action to reverse the effects of global warming. Scrapping this ridiculous VAT rate will result in more efficient energy use and contribute to achieving the Government’s ambitious 2050 target of net zero greenhouse emissions.

“One of the main barriers to reducing our carbon footprint up until now has been that most people have felt that there is little they can contribute as individuals.

“Major investment in energy efficient homes has the potential to cut our consumption in half and by making such products and materials cheaper, everyone has the chance to make a genuine contribution to protecting the future of our planet. I’m urging our political leaders to take decisive action by giving their full support to abolishing this ineffective VAT charge on household energy as soon as we exit the European Union.”

I'm the Assistant Editor on BMJ. If you have any product or people information, or some news you'd like to share, please feel free to email me.
Previous Actis CPD at football ground thermal efficiency conference
Next Family fund raisers share charity aim

FTA Response to the Yellowhammer Document