O, it is excellent
To have a giant’s strength, but it is tyrannous
To use it like a giant

From little acorns do mighty oaks grow, but Huws Gray has sprouted into a veritable forest.

The Anglesey-based company has snapped up the remaining traditional merchanting brands in the Grafton Merchanting GB basket – the plumbing side having been sold off last year.

It’s a tale as old as time: those businesses who want to be bigger businesses buy the assets of those who no longer wish to be in that business. Back in my early days in this job, it was the national plc merchants that had deep pockets and were prepared to dig deep to acquire good businesses, with the goodwill and critical mass that came with them. I can remember a friend telling me he’d taken the TP shilling –  quite a lot of them actually – because he wanted to do so while there was still plenty of money on the table. “It can’t last, Fee,” he told me. “So, I’m taking the money while it’s there.” He was right, later that year there was a run on the Northern Rock bank and it all went downhill from there.

Since then, though, the expansion of the large national chains has slowed-up. Back in 2012, the then TP finance director Tony Buffin said that TP’s big-scale investments into competitor companies like Wickes and BSS were probably a thing of the past and that smaller targets in under-represented areas was probably the way things would go. Come to think of it, the last big scale national merchant acquisition I can think of off the top of my head is probably that of Build Center by Jewson that same year. Expansion for the big publicly-quoted merchants has, instead, been through organic growth and adding new branches or extending into new, complementary areas – I’m thinking Travis Perkins and Toolstation, Grafton and their forays into overseas merchanting.

The mantle of merchant industry acquisition and consolidation has, instead, been taken up by the medium-sized independent merchants instead, backed, in most cases, by private equity finance. That’s where the confidence in the UK merchanting market seems to be.

It’s a good move for Huws Gray. Having doubled in size when it bought Ridgeons in October 2016, it’s now done it again. Take a look the two maps here, the blue pins are Huws Gray branches, the red ones Buildbase (for ease of comparison, I’ve not added in the other brands like Civils & Lintels, The Timber Group, Bathroom Distribution Group, Frontline and NDI brands that are also part of the deal) That is a shedload of extra branches and it takes Huws Gray into hitherto unchartered territory – Scotland, the south east, the south west, a huge chunk of the Midlands leading out to Lincolnshire and the North Sea coast. 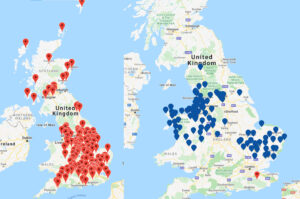 It’s good news for Grafton because they get some serious dosh with which to continue their investment into Selco and their remaining brands, both here and overseas. It’s also probably good news for the people at Buildbase and Civils & Lintels etc – it’s always better to be acquired by a company that actively wants to own you and develop you, and which is as committed to its people as Huws Gray is. But there are some overlapping locations. Quite a lot of overlapping locations actually, and probably a lot of duplication of personnel and resources, too. It will be interesting to see what happens when the Competition and Markets people cast their eye over things and how that map might have to change.