The Chancellor of the Exchequer, Rishi Sunak MP, has announced a raft of financial measures in the House of Common to help businesses as the Covid-19 Job Retention Scheme finishes at the end of October. 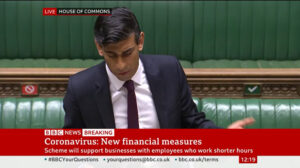 The Job Support Scheme will directly support the wages of people in work, giving businesses the option of keeping employees in a job on shorter hours rather than making them redundant.

The scheme will support viable jobs so employees must work at least one-third of their normal hours and be paid for that work, as normal, by their employer.

The government and the employer will then top-up the pay, covering one-third each of the remaining hours, allowing the employee to keep their job. Anyone who as of yesterday (September 23) is employed is eligible. 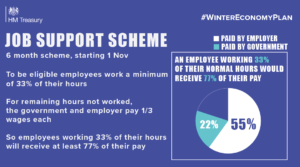 The scheme will prioritise small & medium sized businesses; larger businesses may access the scheme only when their turnover has fallen. Businesses are eligible even if they have not previously accessed the furlough scheme.

Employers retaining furloughed staff on shorter hours can claim both the Jobs Support Scheme and the previously-announced Jobs Retention Bonus.

The Chancellor is also allowing businesses to spread their VAT bill over 11 repayments, with no interest to pay, instead of paying it all in one lump sum in March. “This will benefit up to half a million businesses – on average, turning a one off £60k payment in March, into 11 payments of less than £6k,” he said.