John ‘Yorkie’ Yorke, one of Bradfords’ team at its Axminster branch, took an hour out of his day today (November 11) to show his respects at the Axminster remembrance service & wreath laying. 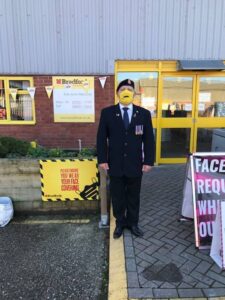 A 37 year veteran of the Armed forces and local supporter of the Royal British Legion, Yorke spent 37 years in the Armed Forces, before joining Bradfords earlier this year. This included a 25-year career in the Royal Navy where he worked his way up to become Operations Room Supervisor. He then spent a further 12 years in the Royal Fleet Auxiliary, where he fulfilled a number of roles including shipboard Helicopter Controller. Yorke’s time in the Royal Navy and RFA has taken him all around the world, including the Gulf and Adriatic, as well as carrying out humanitarian work in the Caribbean and disaster relief.

As Vice Chairman of its Axminster branch, he is a keen advocate of the Royal British Legion and the work it does supporting members and veterans of the British Armed Forces, and their families across the country.

Giles Bradford, Communications and Engagement Manager at Bradfords Building Supplies, said, “Bradfords’ records include many tales of those returning to us from both the world wars, though there is scant detail around those we lost. But we will remember them and the many others who made the ultimate sacrifice to ensure our freedom.”