Volunteers from the construction charity Band of Builders are set to lay a new driveway so that the family of a Burgess Hill man left with hypoxic brain damage brought on by a heart attack can get him out of the house in his wheelchair.

The driveway of the home of Gordon Hart – known as Pete – has become rutted and potholed. This means that it’s a struggle for his partner, Sam Horley, to get him out of the house, as his wheelchair often becomes stuck.

The 55-year-old former bricklayer has been left with a profound physical disability after his heart attack in April 2020 and needs round-the-clock care because he cannot use his arms, hands and legs. He also suffers from epilepsy, diabetes and cortical blindness, and he has carers in four times a day to help Sam, who gave up a 30-year career in the NHS to care for him and is overseeing his rehabilitation. She has secured funding from the local authority to build an extension and remodel the downstairs of their home to create a bedroom and bathroom for him. 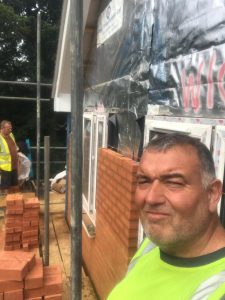 However, the funding doesn’t include a new driveway, so Band of Builders is stepping in to create a bigger, wheelchair-friendly one with parking spaces for Pete’s carers.

“I’ve fought so hard to get Pete home, and we are very grateful that we’re having the building works done to make life easier – but the driveway is a real problem,” she said. “Leaving the house is a huge operation anyway, but Pete hates it because the jolts from the ruts and potholes really hurt him. Being able to leave the house on a smooth new driveway will mean the world to Pete and me because it will open up a whole new world of opportunities for us to get out of the house.”

The eight-day project is due to start on 3rd November and is being organised by the registered charity, which completes practical projects to help members of the UK construction industry who are battling illness or injury.

This will be the 28th project that the charity has completed since it was founded in 2016 – and it is currently enlisting volunteer groundworkers, landscapers, carpenters, electricians and roofers from its community of nearly 50,000 tradespeople and contractors.

Norfolk-based builder Tony Everett – a veteran of six Band of Builders projects – will act as the project lead on this one and said he’s hoping that more than 20 volunteers will get involved.

Pete’s project is being sponsored by DEWALT, the manufacturer of premium power tools, accessories, landscaping products, and anchors and fixings, which provide an all-in-one total jobsite solution. The project is also attracting support from local businesses, which are donating materials for the project and refreshments for the volunteers. The charity is also backed by other major names within the construction industry, including Jewson, Gibbs & Dandy, V12 Footwear, Talasey, Resideo and Haemmerlin.