W Howard has announced the sad passing of David Graham McDonnell on Sunday 27th June at the age of 55, after a long and hard-fought battle with cancer.

He started his working life in 1983 on the YTS scheme at PDT Hulme’s in Brinscall, before moving to W. T Eden and, finally, onto W. Howard Ltd in 1996, where he became Business Development Director. He very rarely sold anything while covering the UK and areas of Europe, but he made many life-long friends who just happened to buy MDF mouldings from him because they wanted to!

He was instrumental in the success of the W.Howard Group business and Dave was one of those people who, once met, was never forgotten. He will be sorely missed by all in the timber trade.

His passion outside of work was Euxton Villa Football Club, where more than 300 people attended his funeral – this is testament to the high regard in which he was held.

He leaves his much-loved wife Sally and children Jamie, who also works for W.Howard, and Heather. Donations can be made to St Catherine’s Hospice in Lancashire, www.stcatherines.co.uk or Macmillan Cancer Support www.macmillan.org.uk 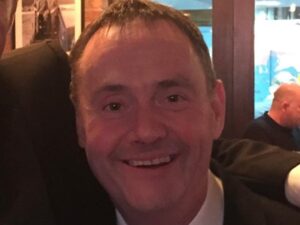