MKM Hartlepool’s Mick Sumpter has collected two prestigious awards on behalf of his charity as well as being bestowed the ‘Teesside Hero Award’ for his lifelong commitments. 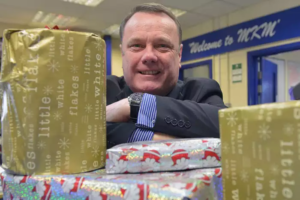 The recognised charity is the European Children’s Help Organisation (ECHO), of which Sumpter is a trustee. The charity, dedicated to helping disadvantaged children in Romania, has been running for over 20 years.

Over Christmas, the Hartlepool branch was the headquarters of the Hartlepool Mail’s ‘Give A Little Gift’ campaign. The staff at the branch, their family and friends all got behind the campaign, with over 600 gifts donated to the branch, which were then distributed to charities around Hartlepool.

Sumpter, as well as running MKM’s Hartlepool branch, frequently travels over to Romania to donate his time and labour. His latest visit saw him open a centre for children with Down’s Syndrome in Botosani – one of the poorest areas of Romania. The centre is run by the ECHO.

The first award was for the charity’s continued work for disadvantaged children in the city of Iasi, given by the Mayor, Mihai Chirica.

The final award was the Teesside Hero Award, awarded by the Teesside Philanthropic Foundation. This recognises Sumpter’s personal longstanding commitment to the causes of disadvantaged children, locally and in Romania. The efforts of Mick, a grandfather, have also helped to raise over £200,000 for cancer-related causes in memory of late friend, Kay Smith. This is in addition to Mick’s commitments to a number of local charities, such as the Carlton Camp, which gives disadvantaged kids from Hartlepool the opportunity to adventure outdoors.

Mick Sumpter, Branch Director at MKM Hartlepool, had the following to say: “It’s fantastic that the ECHO is receiving the recognition that it deserves for the vital work carried out over many years. It’s only with everyone’s fantastic support that the charity is able to continue achieving what it does.

“On a personal note, it’s humbling to receive the Teesside Hero Award. Seeing everyone come together as they did for the Give a Little Gift appeal was truly inspiring. Over 600 gifts were received into our branch, all going to help those kids and their families who don’t have as much at Christmas.