Cabinet ministers have backed initial proposals for a new runway at Heathrow Airport, claiming it is an “historic moment”. As MPs prepare to vote on the plans ahead of the July 11 deadline, Paul Meagh, electrical and instrumentation services director at engineering solutions provider Boulting Ltd, explored how a modular build will benefit the £14 billion project.

“Modularisation is not a new concept and has been used by construction and engineering firms for several years as a way of reducing the complexity surrounding the build or refurbishment of a project.” he said.

For many years, modular construction was thought to be largely box-type structures, providing a bare frame to accommodate construction site workers, large classrooms and residential homes. While the concept still provides benefit for these uses, more and more engineering projects, including the expansion of Heathrow airport, are incorporating the concept into their build as a way of minimising both cost and disruption to the client and end user.

“The recent announcement by the UK cabinet about the proposed expansion of Heathrow airport has been welcomed by many, including ourselves.” explained Meagh “The expansion is estimated to create 60,000 new jobs and generate £70 billion in total economic benefits by 2050. While the site itself is in London, Heathrow plans to use the expansion to drive growth in off-site construction across the country.”

If the vote is successful, a total of four offsite construction and manufacturing hubs will be established across the country, allowing for pre-assembled components to be constructed prior to installation at the new runway. These sites will create thousands of new jobs outside of London, ensuring that more than just the capital city benefits from the expansion.

“At Boulting, we have 20 years of experience working with modular builds, part of which includes the design, fabrication and installation of the rail station services at Heathrow’s terminal 5.  A total of 75 per cent of the project was modularised, enabling us to remove a vast amount of site activity to the controlled environment of a workshop. In addition to minimising disruption to the airport, modularisation improved the overall quality of the project and site safety while reducing the number of site man hours required and total time of the project.”

Constructing on a dedicated fabrication site, such as Boulting’s facility in St Helens, overcomes these issues as the infrastructure is already in place. Experienced labourers are also at hand to build, test and commission a facility before shipping and erecting in its final location, ensuring a quicker and more cost-effective solution.

Meagh concluded, “If the expansion of Heathrow airport is given the green light, its use of modularisation will be one of the largest in the UK. While the concept does have multiple benefits, the decision to use it should not be rushed and all factors should be carefully considered. Working with a leading provider of prefabrication and modularisation services, such as Boulting, can ensure the right decision is made for the project in the most efficient way possible.”

I'm the Assistant Editor on BMJ. If you have any product or people information, or some news you'd like to share, please feel free to email me.
Previous The New Essential Bathrooms Brochure
Next Shipmates needed for Polypipe charity yacht regatta 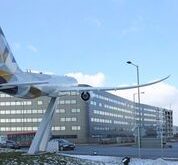 Rockwool keeps the noise down at new Heathrow hotel