Heating manufacturer Grant UK is taking on the sponsorship of the Devizes Town Youth Football Club Under 12’s Team for the 2020/21 season.

The Devizes Town YFC is an organisation run by volunteers who provide football to boys and girls between the ages of 3 years up to 18 years. The Under 12s Team is one of fourteen teams run at the Club which have between them, approximately 230 playing members.

Although the Under 12s Team’s fixtures for the 2020/21 season have been affected by the Coronavirus pandemic, the players are still training and preparing for upcoming games. As a kit sponsor, Grant UK’s logo will be displayed on the team’s away kit, joining other local businesses who are supporting this grassroots football club.

“We are very pleased to be a new kit sponsor for the Under 12s Team at Devizes Town Youth Football Club,” says Anna Wakefield, head of marketing at Grant UK. “The past few months have been incredibly tough for lots of people, especially children so clubs like Devizes Town YFC have become even more valuable than before. Players can focus on improving their skills and playing a game they enjoy, taking their minds away from other worries. Grant UK’s head office is located on the doorstep of this club and we are really looking forward to supporting the Under 12s Team when they get out on the football field to play.” 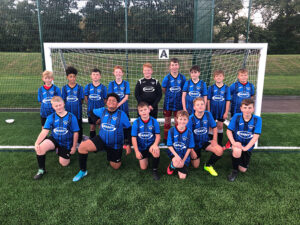