MORE than 1,500 people descended on North Wales for one of the biggest builders merchant trade exhibitions the region has ever seen.

And well over a thousand of those visitors registered in advance for the Huws Gray GIANT Trade Event, held in The Barn at Eirias Park, Colwyn Bay, on Wednesday.

Hundreds more arrived during the busy programme, which included an appearance b 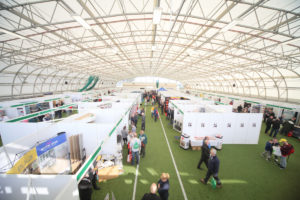 Up to 70 of the top names in construction and DIY were in attendance, among them Knauf, Bostik, Gorilla Glue, Ronseal and Makita.

Dafydd Hughes, marketing manager at the independent builders’ merchants, says the turnout was even better than expected.

“We were completely overwhelmed by the response to the GIANT Trade Event, especially the number of people who registered in advance to be here,” said Hughes.

“This really was a celebration of the industry, and it was heartening to see so much interest in the companies here today.

“For so many of the top names in DIY, construction and the trades to be under one roof is unheard of in this area so we are thrilled with how well it was received and look forward to holding another exhibition in the future.” 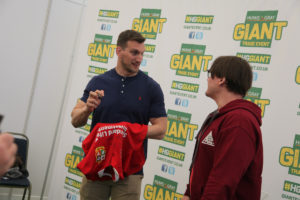 photos and signed rugby balls throughout the day.

The expo was also a platform for community organisations such as Ty Gobaith children’s hospice and popular radio station Heart FM to connect with the public, and everyone who walked through the doors received a product pack of DIY materials worth more than £20.

It comes after a phenomenal start to the year for Huws Gray, which has expanded to more than 100 sites and 1,800 staff, making them the largest independent builders’ merchants in the UK.

Marketing officer Chris Roberts said that after 18 months of planning, the positive results made it all worthwhile.

“We have had an amazing 2019 so far and are growing fast, so to be able to give something back to our customers and partners was important to the company,” said Roberts.

“We would like to thank Sam Warburton for being here and of course all of our staff across the region – notably Colwyn Bay – who worked so hard to make this a success.”

I'm the Assistant Editor on BMJ. If you have any product or people information, or some news you'd like to share, please feel free to email me.
Previous Save the planet
Next New open fronted stacking containers 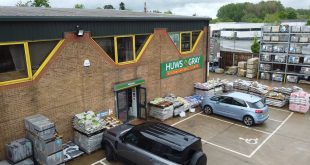