Bonfire of the vanities

The miserable have no other medicine, but only hope.

It’s over, finally. The long hot Summer, the dying embers of the Johnson era are doused. The endless hustings, the carnivals travelling round the UK, trying to persuade the Tory faithful that either Rishi Sunak or Liz Truss are the safe pair of hands to steer to good ship Government through the murky waters of the next few years and to the safe harbour of the next general election. Is it just me, or does Boris Johnson’s resignation seem to have happened so long ago. I’ve known elephants with shorter gestation period than Truss’s to become PM.

In the meantime, the country has been whisked back to the 1970s by a combination of drought, à la Summer of 1976 and endless industrial action, à la Winter of Discontent. Pretty sure the only people properly affected by the postmen going on strike will be those parents who left their children’s new school shoes until the last minute only to find there are no size 5s in stock in any actual shops…but bus drivers striking on the day thousands of children start at their new secondary schools is just mean.

Moving on, had the Tory Leadership hoo-har been decided earlier, they might have had a chance to come up with something rather better than what feels like a rather cobbled together, back-of-the-fag-packet semi-solution to the energy price crisis. I’m told that behind the doors of Westminster it is being referred to as a crisis of a scale the size of Covid, and is likely to require a similarly robust response.

Something had to be done, there are too many businesses across a whole range of sectors that, having just about held it together post-Covid, could very easily go to the wall without serious intervention on fuel costs. However, the thing that immediately strikes me about the proposed price freeze is that there is no incentive for people to use less energy. The spectre of ’70s-style rationing and blackouts hasn’t gone away, and there’s less reason, with a price freeze, for householders to look at making their homes more energy efficient. Although, as former Labour Deputy Tom Watson pointed out this morning, if the Construction PMI figures are right, and there’s a construction slowdown coming, there’ll be plenty of skilled workers ready and able to install insulation if only the government could get its act together and come up with a scheme to encourage it.

It’s early days for a new-look Cabinet, which has been purged of anyone who showed any support for Truss’ rival Rishi Sunak. Let’s hope she prioritises competency as much as loyalty. Although, I do a bit sorry for her, having to look at that awful wallpaper in Number 10 every morning. 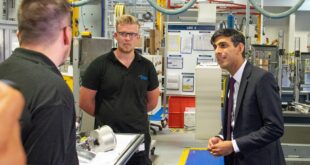